While the fearsome painter of ‘The Scream’ Edvard Munch was carving out his place in avant-garde Paris, another Norwegian artist was making a name for himself in very different circumstances. Nicolai Astrup is a name you are unlikely to have heard of, but he is a very big deal in Norway, known for his mesmerising images of the Scandinavian landsscape that he loved so much. Whether Astrup’s tremulous meadows of yellow marigolds of his home town Alhus have the same weight as Munch’s evocative paintings is hardly the question worth asking. But Astrup did visit Paris in 1902 where he picked up the inspiration of the vastly popular Japanese prints that frequented Impressionist painting. But soon returned to the fjords.

Astrup’s paintings and wood block prints at the Dulwich picture gallery radiate with a tremendous sense of place. Labours of love, the connection between Astrup and his homeland is clear. The son of a devout parson in a small town, Astrup was greatly influenced by the religious rhetoric of his father from the pulpit and the folk stories of his youth of fairies, trolls and magic.

With the tumbling rain and the soft pink light across waterfalls, Astrup can’t help but imbue his work with a dreamlike nostalgia that is soothing somehow. Again and again he returns to the white wooden beams of the old parsonage where his father preached and the grassy knolls of the velvet green mountains. Astrup was so emotionally connected to his surroundings that he detested change, abhorring the loss of the fields of marigolds when the meadows were drained.

He was also a pretty traditional character, that planted an enormous array of rhubarb in his back garden. While hardly the myth of Munch or other famous modernist artists with severed ears and catastrophic personal lives, the farmer Astrup in his pleasant garden with his loving wife is severely against type. True Astrup was revolutionary in his refusal to use aerial perspective, adopting instead a ferocious colour palette than never wanes. But you have to wonder if he is as radical as the curators would have us think, or just a particularly wonderful local artist. The colours are Fauve for sure, and the rich symbolist language is thrilling, but Astrup was never destined to change the conversation in modern art. 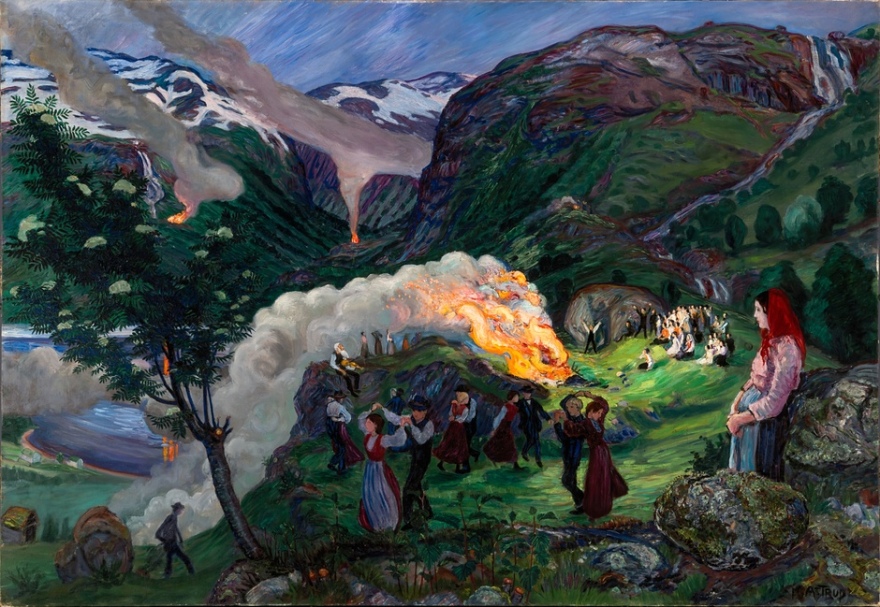 In the final room, Astrup’s canvases are set on fire as the artist captures the fascinating Midsummer festival in Norway that still clings to its pagan roots. With his strict father refusing to allow him to join the fun in his youth, this rebellious series of paintings shows the sweltering, spitting flames rise up out of the landscape as the festivities float over the billowing smoke. Far from a provincial artist, these paintings define Astrup  with a dynamic and a rich symbolism that is endlessly poetic.

There is no denying these images are ferociously modern and reveal the weight of Astrup’s talents. For a new discovery, this exhibition at Dulwich Picture Gallery is unmissable.