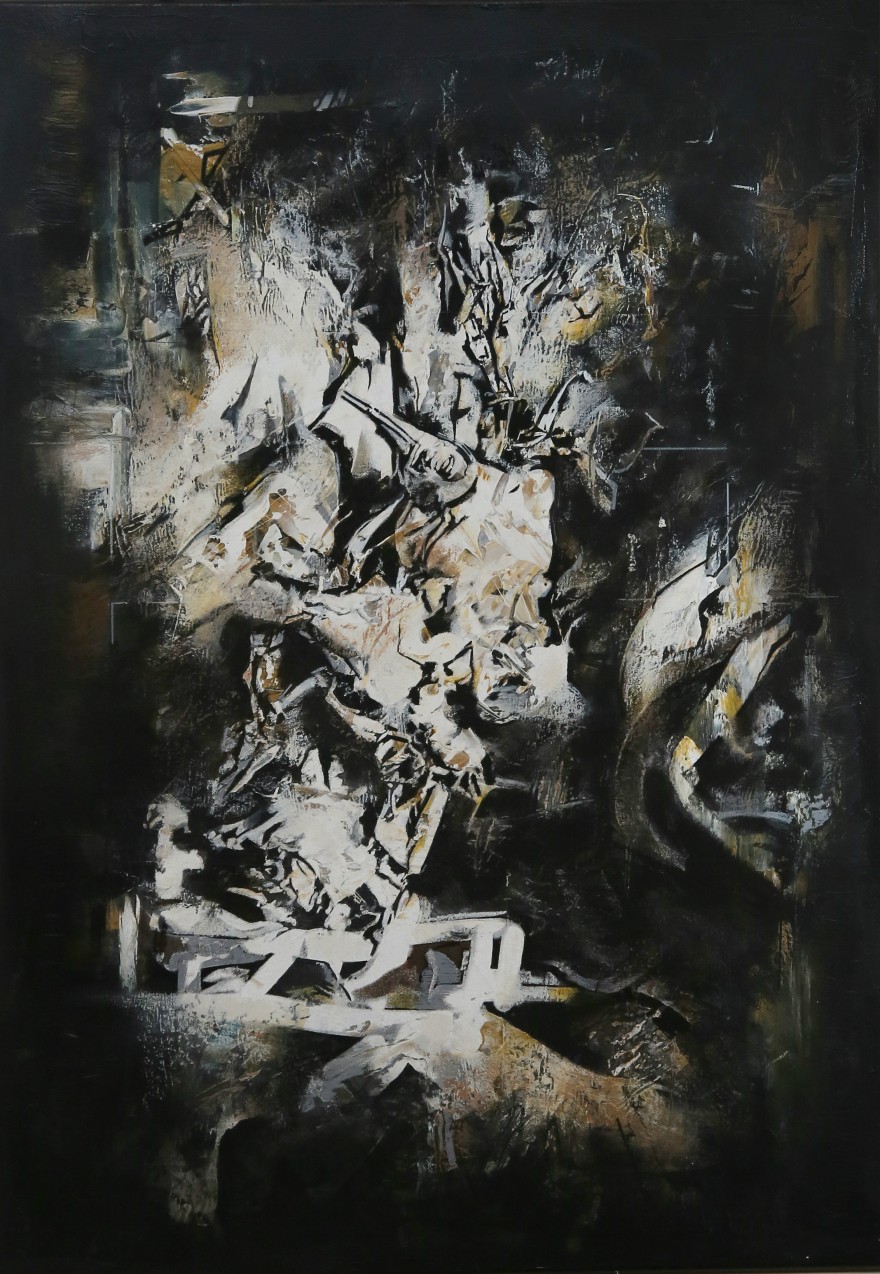 This summer I had the pleasure of meeting British artist Robert Mason and discovering more about his life and practice from his studio on the Colne Estuary, ahead of his exhibition at the Colour Index Agency in London, organised by writer, editor and curator William Davie. The exhibition continues until 20th July 2019 by appointment.

“I’ve always worn a mask, all my life,” Robert Mason explains as we stroll through his home in the small town of Wivenhoe on the Colne Estuary. “It’s just sometimes that mask slips. Small things bring you back.” Mason is an artist long associated with sorrow. The tragedy of losing his parents, sister and brother as a young child has somewhat defined his career, with critics all too ready to embrace the story as a familiar tale of tormented genius. But despite the macabre dealings of his past, Mason has emerged a beacon of optimism. Now in his early 70s, Mason is even mildly surprised to find himself at this point. “It was never meant to be this way,” he teases gently.

Mason comes from a generation of artists that emerged at a time when the so-called “School of London” was at the height of its powers. Of all the London painters, Mason is perhaps most closely connected to Frank Auerbach. It was Auerbach who encouraged Mason to disregard the nature of fads and trends, to ignore the proclamation that painting was dead and follow his own path. Akin to these giants of Modern British Art, Mason has remained resolutely figurative in his practice, grounding his darkly evocative imagery in the poignant experience of what it means to be human.

Bones, masks, animal carcases and crouching figures are unavoidably connected to his early suffering, but at the heart of Mason’s method is a need to feel something – be it the loss of family or the despair of grief or another sensation all together. For that reason, the Norwegian artist Edvard Munch also holds a particular grip. Munch’s haunting painting of his own sister upon her death bed resonates only too clearly with Mason’s anguish. Much like Hamlet, cowered over an open grave, Mason bought four skulls in the 1970s to represent each of his parents and siblings, painting a series of spectral images in their silhouettes. For Mason there must always be a searing emotional truth that draws the viewer in and holds them there.

Mason grew up in Yorkshire, immersed in the rolling hills that inspired Henry Moore and Barbara Hepworth, and studied in Harrogate ( 1963-1965) before taking up a place at Hornsey College of Art in London (1965-1968). Mason originally trained as a sculptor and worked as an assistant to Hubert Dalwood, a member of the informal group of artists known as the ‘Geometry of Fear’ who rejected the rise of Abstract Expressionism and Minimalism from across the Atlantic. At the height of the Swinging Sixties, and as the anti-Vietnam War protests raged, Mason travelled to The British School in Rome (1968-1970). For the first time, Mason worked from his own studio space, opening up a new world of possibilities and igniting a passion for Italian culture that remains with him some fifty years later. It was here, as he laid new paintings out for passers-by in the Piazza Navona, that he was discovered by Laura Crispolti of the Galleria Condotti and found his work suddenly exhibited alongside those of Giorgio de Chirico.

Mason roamed the ancient sites of Rome, looking with fascination at archaeologists digging amongst the ruins. It was in Rome that he met Anthony Blunt the Art Historian, later revealed as a Soviet spy, who would accompany a group of young artists to look at masterpieces by Caravaggio and Bernini in the city ‘s churches, both under the natural cascade of sunlight and by candlelight. This experience of the melodrama of Baroque art has had a significant influence on Mason’s practice.

The notion of excavation has stayed with Mason, apparent in the way his brooding works gradually make themselves known and coalesce into the hints of bodies or edges of natural forms. Often using transferred images as his foundation, Mason engages in a layering process with paper and paint, building up luscious marks of acrylic which are then scrubbed away with his fingertips, flagellating the impasto to dismantle and remake the work many times over. In the midst of this process, there is a sense of peeling back the deposits of material, exposing the residue of memories and reflections of the surrounding world that lie hidden. Through the relentless physicality of his practice, and its need for both time and effort, Mason has been left with hardly any fingerprints at all. Indebted to Robert Rauschenberg’s array of post-war collages, Mason’s layered works are imbued with the essential suffering of human existence. Being an artist is hard after all, Mason reminds us, a struggle formed by experience.

Emerging from the gloom, Mason’s works are filled with the same flare for drama as the European masters of old – speaking to the majesty of Michelangelo and Gian Lorenzo Bernini, the agony of Dante’s Inferno, the nightmarish apparitions of Henry Fuseli and the violence of Francisco de Goya. The restless changes of light and colour, like the flickering candles of Roman churches, bring his tattered forms into view. Within this purgatory, Mason’s images sing of the grand allegories of life and death, through all the crescendos and diminuendos of a tragic opera. Veiling and unveiling, Mason’s works seem to play the roles of a masquerade, like a performance of the Italian Commedia dell’arte.

From Italy, Mason travelled to America to teach at the University of Florida before returning to England in 1971, where he settled in Shoreditch – exchanging the antiquities of Rome for the detritus of the East End. Mason’s work plunged back into the shadow of nostalgia, but embraced a greater sense of gesture and a more vivid palette. The birth of his own children prompted a series of poignant mother and child works in the late 1980s, filled with a new hope, whilst referencing the Baroque visions of the Pieta. Through the symphony of his oeuvre, Mason oscillates between the revelations of his interior world and the return to secrecy and concealment, as if treading carefully out into the light and retreating once again.

From his studio in East London, Mason made a series of still life works based on bird carcasses purchased from the local market, reminiscent of the palpable flesh of Chaïm Soutine’s hanging meat paintings. Using these bodies for his artwork, Mason then plucked and roasted his subjects, consuming their remains in a full cycle of creative life. Mason recalls how he once joined the painter Michael Andrews on a stag shoot in Scotland, but the pitiable remains of the dead animal disgusted him. As Mason explains, he was just too close to death to take any pleasure in a first kill. Mason’s series based upon the myth of Actaeon, transformed into a deer and torn apart by ravenous dogs, captures something of this gruesome experience.

Mason’s work moves in cycles, often taking its starting point from an arrangement of objects like a memento mori, pulsating with the inescapable transience of life. These cabinets of curiosities pay homage to Joseph Cornell’s assemblages, amassed from the antique shops and dime stores of Manhattan, and even Henry Moore’s scattered collections of driftwood, shells and shards of bone. In one of his most recent series, Clear Point, Mason has turned to an array of encrusted oyster shells from the Essex coastline for inspiration, delving into their rich tactile surface and gleaming veneer.

Perhaps Mason’s most important body of work to date is the Broadgate series (1989-1990), inspired by the Liverpool Street building development. Originally asked to create a single painting, Broadgate came to dominate an entire year of Mason’s life, during which he produced one hundred and fifty pictures, and a group of elaborate triptychs of the construction. Fascinated by the renovation of the area, in a flurry of noise and destruction, Mason was also moved by the struggle of the workers – recalling his father’s profession as a lorry driver. Delving into the labyrinth of dark tunnels, Mason’s spectral images of the labourers, their bodies stooped and backs arched, were now based upon living people rather than the ghosts of his past. These images looked back almost inevitably to Henry Moore’s accounts of the wartime shelters of London’s underground. Far from simply a documentary enterprise, Mason uncovered the deeper resonances of architecture through the Broadgate series: its ability to overwhelm and subdue. Structures of buildings and the hunched forms of workers are treated in the same way – their outlines mottled and decayed, coarse and textured, as if to encapsulate the demolition and revival of life. In 2006 Mason also spent time in Indonesia; producing work based on the rapid urban development of Jakarta called the Grand Indonesia series. In contrast to Broadgate, however, Mason was this time an observer, removed from the labour, the dust and the dirt.

Dowsed in myriad mythological and literary references, the intimate format of Mason’s work encourages the viewer to breathe deeply and plunge into a tremendous swell of emotion, compressed into the smallest of scales. Mason immerses the viewer in this space, an arena of shifting emotions that both nourishes and consumes. Stripped of all we know of Mason’s personal mythology and resisting the urge to fetishize his tragic past, these works are not simply cathartic exercises. Their heady mix of renewal, violence and melancholia makes the breath catch in our throats, forcing us to feel something that perhaps we never thought possible.

One thought on “Revelations | Robert Mason”